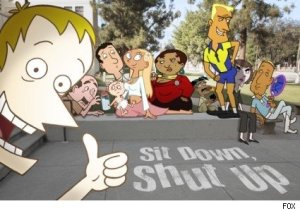 This is a loveable little show that flies under the radar. When it disappeared from the Fox Animation Domination line-up after only a few episodes, I thought it been canceled for good, but then it turned up at midnight on Saturdays. Guess it was too offensive for prime time viewing. I don’t see how it’s any worse than Family Guy and American Dad; in fact it skips the cheap fart jokes and goes for the more nuanced vulgarities.

Before you even watch an episode, you can expect great things based on the cast; Kristin Chenoweth, Jason Bateman, Kenan Thompson, and Will Forte, for starters. If the cast isn’t enough to grab you, the animation should be. The show uses hand drawn animation against live action backdrops. It messes with your head a little at first, and almost allows you to forget you’re watching an animated show.

So the pilot opens with a road sign telling the audience this is Knob Haven, FL, population 9,334. It is, the sign says, “As pretty as a picture except for the people.” And below that, “You get used to it.” Okay, I had to pause the video to read all that, but that’s the kind of little joke that is buried throughout for those willing to look.

Within seconds we have a nutsack joke—although English teacher Ennis Hoftard is referring to an actual sack of nuts. Ennis wears a bicycle helmet all day. Each of the eccentric teachers at Knob Haven High School is introduced by his or her yearbook entry, with name, subject, and catchphrase. Each is a loser of the highest order, in his or her own colorful way. There is simply too much wackiness flying out of this show to keep up in one viewing. Watch it at least twice.

There is a new principal (Kenan Thompson) at KNHS, a no-nonsense African American woman who—like most of the other characters—isn’t in it for the love of the kids. Her catchphrase is “No.” She announces to the teachers that heads are about to roll. The budget is being cut since the school performed badly on No Child Left Behind standards. The lone ray of sunshine in a bunch of perfectly miserable people is Miracle Grohe (Kristin Chenoweth), a neo-hippie/creationist single mother on whom the sun always seems to shine. Natch, one of the other characters, the P.E. teacher, Larry “I don’t like to say my last name” Littlejunk (Jason Bateman), has a mad crush on her.

There is a drug scandal, in which some unidentified pills are confiscated from a student’s locker. Miracle, the science teacher, asks God to tell her what kind of pills they are. Sue figures, if they should happen to be steroids, she can use them to enhance the skill of the football team and therefore, alumni donations. Only they’re not steroids, the vice principal, Stuart “I need a catch phrase” Proszakian, takes them, and, well… things go awry.

It is refreshing to see high school life viewed through the eyes of the adults. This has been attempted here and there, as with the canceled Miss Guided, and on Glee, but I have never seen it done with such joyful irreverence. (Actually, if Sue Sylvester finally gets fired from William McKinley High she should take the first bus to Knob Haven.)

In addition to being ROTFL ridiculous, the show delivers a bit of social commentary, with its references to public school funding and a joke about the current U.S. political climate. Where it really pushes the envelope is with its near constant references—with varying degrees of subtlety—to student/teacher sex.

Larry: “I always ending up blowing it, like the stupid P.E. teacher that I am.”

Stuart: “I could never even get my P.E. teacher to do that.”

Is it wrong that that’s funny? Maybe, but Sit Down Shut Up doesn’t give you enough time to dwell on it, since it’s on to the next bit in the time it takes to slam a kid’s head in his locker door.