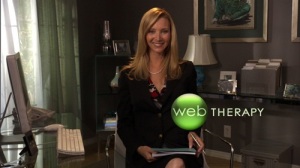 When Lisa Kudrow first looked at the camera, smiled her patronizing smile and said, “Hi, I’m…” I swear I thought she was gonna say “Regina Phalange.” It’s always an adjustment to accept an actor we’ve watched for a long time as one character, as another. And this Fiona Wallace character has the air of Phoebe Buffay putting on her Regina alter ego. In other words, she’s not exactly natural. But that’s not the idea. This pilot lets us know immediately what tone it’s going to take.

We see the desktop of Fiona’s computer as she gets to work conveying the show’s premise. She is a therapist (legitimate?) treating people via the web in three-minute sessions. The pilot is actually seven minutes long which, when we’ve been prepared for three, feels a bit long. The funny thing about media made for the web is we demand brevity.

Visually, it’s super simple, and it’s really just one joke. Fiona is treating a nerdy man named Richard. They greet each other with “it’s so nice to see you,” etc. even though it’s the first session, so we’re prepared for a history. It slowly comes out that they’ve had a relationship, possibly romantic. Each has his/her own perception of past events though, and both are a little nuts, so we’re not sure whose version of reality to buy.

Based on this first episode, the premise seems thin for an ongoing show, but somehow it’s in its third season. I haven’t watched to find out, but hopefully a season arc emerges, keeping the viewer coming back. Perhaps we haven’t seen the last of Richard; but how much sexual tension can you build showing two characters who aren’t even in the same room? Web shows tend to figure these things out as they go.

One thought on “Web Therapy”