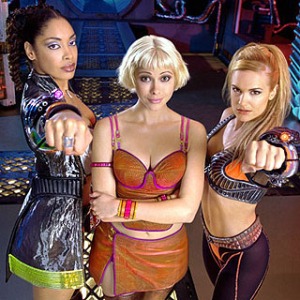 This show, which could have been called “Boobs in Space,” was brought to my attention by a former roommate who watched it to fill up the space between Baywatch episodes. It is so campy and awful, I was delighted to find it on Hulu. What I didn’t remember was that one of the main three actresses is Gina Torres, Zoe from Firefly!

You have to hand it to these writers—they need all of a minute and a half to show us just what a  joyride in the cheesmobile we’re in for. We open on an interior shot of the now-dilapidated Sistine Chapel. Shot of a bunch of hot people in really skimpy, “futuristic” looking out fits. Some talk about going to “the surface.” A disembodied voice prodding them to go up there. The main character snapping her buggy-looking goggles into place, saying defiantly, “Let’s do it.”

Here’s the premise: a woman in 2001 went in for a boob job. Something went wrong with the anesthesia, and she was cryogenically frozen until they could find a cure (for anesthesia?) She is now waking up—spontaneously—in the year 2525. She’s been brought to a medical lab that looks like something out of Barbarella to be harvested for spare organs, wearing a costume reminiscent of the chick in The Fifth Element. Oh, and spoiler alert, she’s a stripper.

Before we meet our heroine, Cleopatra (Jennifer Sky – who?), we follow her soon-to-be new BFFs, Helen and Sarge (Victoria Pratt), in battle. They tromp around underground in the most uncomfortable looking space armor I’ve ever seen. Their cleavage, midriffs and legs are in some serious danger should a laser battle take place. By the end of the first scene the man has turned on the women. They discover him to be a cleverly-named “betrayer robot.” Clearly the women are the only heroes here, nothing unexpected in the era of Xena Warrior Princess.

The enemies in this underground future are robotic creatures called bailies. Before they get to the level boss, though the women still have to fight off the betrayer bot. He’s got laser vision that makes Superman look like a punkass. Defeating him involves some snazzy moves designed to show off the women’s hot bods. After that, Cleo attacks Sarge for no discernable reason other than that chick fights are hot.

When Sarge asks Cleopatra, “You’re very concerned about the way you look, aren’t you?” you have to laugh. And hope that the show’s creators are not actually taking this stuff seriously. The plot of this particularly story is resolved pretty easily, thanks to a handy talent of Cleo’s that has nothing to do with her cleavage. Aaaand, by the end of 22 minutes everyone is happy and ready to fight evil together. Cleo is surprisingly accepting of her circumstances. So if she’s not going to take this seriously, why should we? Answer: we shouldn’t. If you abandon all sense of reality and logic, you might have fun with this show.