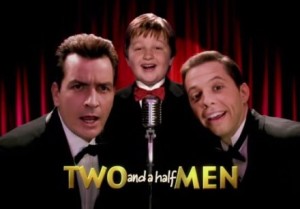 Let’s play pretend. Let’s pretend that we don’t know Charlie Sheen has gold teeth or what he truly thinks of Chuck Lorre. Charlie Sheen is a movie star who made an unfortunate foray into television taking over for Michael J. Fox on Spin City. And Jon Cryer is just Duckie. And these two guys who we last cared about in the 80s are co-starring on a new show called Two and a Half Men.

Charlie Sheen’s character, Charlie Harper is painted as a womanizer literally from the first seconds of the pilot. He’s in the bedroom with a woman. When she leaves the room to change into a lacy negligee, another woman calls the answering machine to tell Charlie off. The laugh track is kept busy with sex jokes for the first minute and a half.

The next voice on the answering machine is that of Alan (Cryer), Charlie’s brother, who announces that his wife has thrown him out. Thus the premise for the show—Alan wants to stay with Charlie, where he will surely be in the way of Charlie’s love life. In fact, he’s already there on the other side of the bedroom door. In the conversation that follows, we find that Alan, the brother who has been married for 12 years seems to know far less about women than the single Charlie. Also, it’s slipped Charlie’s mind that Alan has a 10-year-old son, Jake.

The jokes fly fast and furious. Alan has brought his own sheets to sleep over. He’s been named Chiropractor of the Year. Charlie gives a rundown of his cush life, which includes midday margaritas and sundeck naps.

The next morning Charlie opens his eyes to find a pasty little boy face hovering over his bed. Jake (Angus T. Jones) is not a cute TV kid. He’s a pudgy, dorky kid, one used to structure—eating lunch at a certain time, drinking a specific brand of milk. Charlie doesn’t do structure. Jake’s presence sets up some no-duh commentary on adult life, i.e., “If [wine] makes you feel bad, why do you drink it”? Charlie quickly learns of another advantage; the kid is a babe magnet. “You’re better than a dog,” Charlie delights in telling him.

In this episode we meet Judith (Marin Hinkle), Alan’s uptight wife who believes she might be gay and Evelyn (Holland Taylor), the guys’ well-dressed, no-nonsense mother. We also learn early on that Charlie has a stalker who calls him “monkey man.” She’s a cute neighbor, Rose (Melanie Lynskey) who claims to be the maid and does nonsensical things like gluing the kitchen cupboards shut. We know to expect a lot more of her.

The revelations of Charlie’s degradation continue throughout the episode. “Charlie is great with kids,” Alan assures Judith. Cut to Jake playing poker with a bunch of men in a smoke-filled room. In retrospect, it’s easy to wonder if Charlie Sheen is even acting; he doesn’t even have to respond to a different name.

A lot of Alan’s humor comes from his pained facial expressions. He naively clings to the belief that he and Judith are just “working things out.” He’s so uptight one wonders how he fathered a child in the first place. There is no end of potential jokes in this odd couple scenario. (As a side note, Alan’s character bears an uncanny resemblance to Felix in the 1968 film The Odd Couple.) It takes a new tone, though, one that was perhaps more irreverent than network sit-coms tended to be in 2003.

Alan and Jake try living with Evelyn, but Charlie asks them back. It seems that the love of a kid has put a tiny crack in the walls around his party boy heart. Clearly things don’t work the same way in real life.

UPDATE: 5/13/11 Ashton Kutcher has officially been cast in Two and a Half Men.