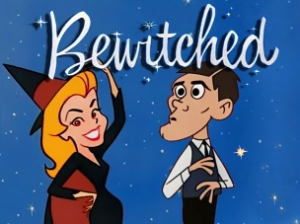 The creator of Bewitched, Sol Saks, who passed away last week, wrote only the pilot before moving on to other things. The show would go on to run eight seasons and then live on in syndication, later spawning a best-forgotten movie in 2005. Shows from Charmed to Mad Men can be said to have roots in Bewitched. So old Sol did pretty well for himself with this one script.

Bewitched is the story of married life between a witch and her mortal husband, with ongoing meddling by her mother. The pilot falls back on the crutch of having a disembodied voice narrate the back story, rather than having it unfold naturally. In this case, the latter choice might have worked better, because it almost feels as if these two characters just woke up married. We first get to know the beautiful blond Samantha (Elizabeth Montgomery) and her nerdily handsome ad exec husband Darrin (Dick York) on their wedding night. Somehow, they’ve made it this far without him discovering that she is a witch, or apparently, meeting each other’s families or friends.

It’s not a particularly original premise. Saks admitted to taking inspiration from the play/movie “Bell Book and Candle.” Supernatural families were familiar small screen territory, with The Munsters and The Addams Family premiering the same year.

As Samantha primps in the bedroom of the honeymoon suite, we first see her use her powers to levitate a hair brush. It’s not a bad special effect for 1964. Samantha’s mother appears out of thin air to reprimand her for getting married and attempt to take her away. The mother, Endora (Agnes Morehead), establishes herself as a strong female character, but what else would you expect from a witch? The stereotype of the ugly old hag in a pointy black hat is acknowledged and tossed out with humor. Samantha demostrates equal strength by standing up to Endora, insisting on staying with her new hubby. These are real witches, the show seems to say. (But no recitation of the Wiccan rede.)

Any flicker of feminism is soon extinguished, however. Once Darrin adjusts–with the help of no more than a couple of drinks and the dismissal of his skeptical friends–to Samantha’s witchhood, he basically tells her it’s all good, so long as she learns to cook and keep house. Toward the end, Samantha hints that she will not be without the aid of magic in completing her domestic chores, so there’s the hook to keep the audience coming back. She apparently plans to keep her magic use under her non-pointy hat while her husband remains oblivious. Nice, healthy marriage. We know to expect lots of intereference from Endora, too.

The rest of the pilot plot revolves around a jealous bitch of an ex-girlfriend who invites the newlyweds over for dinner. Man, she’s a bitch. The irony of the non-witch being the evil one here isn’t subtle. Samantha takes her revenge, however, to Darrin’s disapproval. We can see Darrin isn’t going to approve of much. That’s okay, he’ll eventually be recast in one of TV history’s most well-known shark jumps.