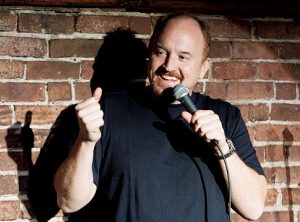 This show has done very well in its first two season, and I don’t even remember how or when I first heard about it. But you can see how someone watching the pilot for the first time, with no prior knowledge of the show, would have been unsure what to make of it. I actually hesitated to go back and re-watch it for this post because it’s so painful to watch. Painful as in, uncomfortable, probably because it’s so real.

Louie is it’s not a reality show, it’s not a sit-com, it’s not a sketch show, although it has elements of all of these. It doesn’t even look like anything you can put your finger on; it’s gritty appearance makes it seems more like a web series than a breakout hit on a FX. As with many comedians who develop shows about their lives, Louis CK presents this one as a glimpse into his world. The opening sequence consists of a handheld camera following him through the streets of New York to a stand-up gig in a (literally) underground club.

The pilot episode is split into two stories, with very different subjects but the same theme: When Louie attempts to do right, bad things happen.

In the first story, he is volunteering for a field trip with his daughter’s class when he inadvertently gives the bus driver some bad directions. He ends up with a busload of kids stranded on the side of a road in Harlem. His shining moment (or my favorite, at least) is when he rearranges the kids on the bus so that the black kids are beside the windows. The teacher reprimands him, calling the move offensive. “I know, right?” he replies. Yes, it’s wrong, but it kinda makes sense.

The second story is about the worst date in the history of ever. Louie gives some background to his comedy club audience about how he’s divorced and hopelessly cynical about love. Then we cut to the date. Words on a blog cannot do it justice. It’s too horrible to be real, yet it’s totally believable. Everything Louie does is so awkward, from being over-dressed for the date to picking restaurant with a long wait while his date is starving. The woman is kind of bitchy, but even when she finds the patience to try hitting the reset button on the date, she’s only rewarded with more awkwardness.

There aren’t many regulars on the show, so don’t get attached to any characters (except the daughters). There’s no long-term story, though there are definitely recurring themes, which the pilot introduces perfectly.  The show essentially just illustrates the anecdotes a stand-up comedian is telling, but in a manner as raw as if you’re sitting there with your minimum second drink. It revels in all that sucks about life — from milk cartons to dog euthanasia — and finds a way to make it funny. It’s hard to tell here, but the show has really sweet, almost sappy moments as it evolves over the first 2 seasons.

Season 3 starts this Thursday on FX. The pilot can be found on the special features of the Archer season 1 DVD — a solid investment.