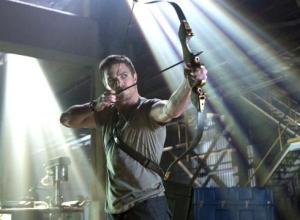 It’s official. Bows and arrows are the hottest accessory for fall. I don’t know if Darryl from The Walking Dead started it, or if we can credit Katniss Everdeen, but two of the fall pilots screened at Comic-Con last night heavily featured this handy but rustic weapon.

Arrow, in case you’ve been living on a deserted island, is about DC Comics hero Green Arrow. You might remember the character, Oliver Queen, from Smallville. Forget about that. This is a whole different take on the character. Although it maintains that CW sheen, Arrow is darker and its hero more (so they want us to observe) troubled.

Oliver (Stephen Amell) has been stranded on an island, whose name means purgatory (Look, symbolism!), in the North China Sea for five years. Thanks to some amazing bow and arrow skills, he lights a fire just in time for it to be seen by some fisherman. He arrives home to much media fanfare; he is a billionaire playboy who was arrested shortly before his disappearance for getting into an altercation with a papparazzo.

Through a series of flashbacks we get to relive the night of the yacht crash that stranded Oliver, killing his girlfriend, his father, and another man. Back in the present we meet a tough-as-nails bleeding heart lawyer named Laurel (like so many DC characters her initials are LL, but the last name escapes me). It’s no surprise to learn that Laurel is the sister of the dead girlfriend, Sara. But actually Laurel was the girlfriend, and Oliver was cheating with Sara. Now, of course Laurel hates his guts.

We also meet Oliver’s younger sister, his mom and her new husband, Walter, and a maid — who seems like more of a mother figure.

Secrets and revenge are heavy themes throughout. A line spoken by a detective, “A parent would do anything to keep their child safe,” drips with meaning, bad grammar notwithstanding. It turns out that detective is also Sara and Laurel’s father. Everybody is so closely interconnected, it strains belief.

The point of the show is that Oliver runs around stopping bad (read: rich) guys from taking advantage of the less fortunate. Besides being a badass with a bow he also possesses incredible martial arts skills and an over-developed sense of justice, things that we are to believe — I suppose — that he picked up on the island. To make all of this buy-able these writers are going to have to give us a lot more back story about what happened in purgatory. Maybe they plan to. Based on the pilot, the show is totally predictable. It gets in a good Twilight joke, though, that had the Comic-Con audience dying.

Revolution, coming this fall to NBC, opens with a man rushing home to his wife and two small children just as the power goes out. As in,  ALL the power goes out, not just electricity. Batteries, gas-powered engines, everything all over the world stops working. We flash forward 15 years and meet the same family, living in what has become a farm village. The daughter, Charlie, is now in her teens and soon rises to the top of the heap as protagonist — at least for this episode. It’s a fairly large cast and looks like it might do a Heroes-type shift among disparate but interconnected characters.

In this post-power society, an oppressive government has risen, led by a General Monroe. His henchmen have a letter M branded on their forearms. He is after Charlie’s father and when the militia comes to arrest him, son Danny takes a stand — with a bow and arrow. His actions spark a shoot-out that leaves the father dead. Danny is taken prisoner and, with his dying breath, the father instructs Charlie to go into Chicago (apparently the nearest city) and find his brother, Miles (Billy Burke).

Charlie (Tracy Spiridakos, Being Human) is a dreamy teenager who keeps wandering off into the wilds despite her father’s warnings. She keeps a Return of the Jedi lunchbox full of postcards and other memorabilia of a lost time. (Return of the Jedi seems to suggest the wrong era and almost got me confused over when the show is set, but it got a cheer from the Con crowd.)

The whole world of the show is kind of Life After People meets The Hunger Games. It’s a lot like your typical post-apocalypse story, but without monsters; no zombies or aliens. Looking for all the world like Katniss, complete with quiver of arrows across her back, Charlie sets off with her father’s girlfriend (her mother died at some point) and a geeky guy who has taken up the role of village school teacher. The latter character provides some comic relief and some perspective on the real world. “I used to work at this place called Google,” he says.

Both Arrow and Revolution pilots end with a twist, a revelation about a particular character. In Arrow, you can see it coming from a mile away. In Revolution… I don’t want to spoil anything because this show looks like it might be worth watching in the fall. Can we forgive NBC for The Event and Terra Nova?

3 thoughts on “Arrow and Revolution”