Now that its premiere season is behind us, it’s a good time to look back at the pilot of Marvel’s Agents of S.H.I.E.L.D., and remember how we got here. A re-watch of the pilot serves as a reminder not only of the show’s charm — maybe the reason we hung on through some slow weeks — but the Whedon/Tancharoen family’s skill at storytelling. Despite the lukewarm reaction when it first aired, this is a hell of a good pilot, in hindsight. It kicks off the season arc, the story of Coulson (Clark Gregg) building his team and gradually learning about TAHITI, and all of the relationships therein. But instead of making its B-plot a one-off, it too sets up a long, methodical hero’s journey. 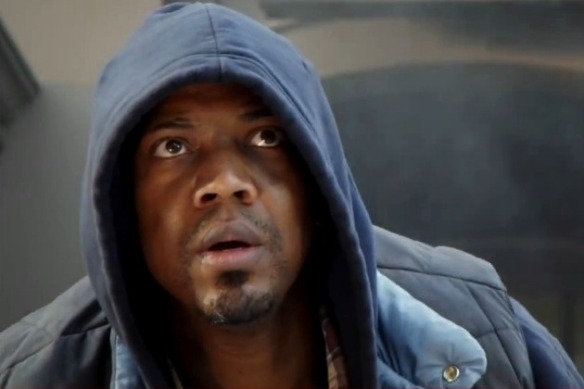 The latter is what interested me most. Even though we had a long stretch of Mike-less episodes, this season was very much Deathlok‘s origin story. In fact, Mike (J. August Richards) himself says that at minute 30.

Mike Peterson and his son Ace are the first characters we meet. We hear Skye’s voice talking about how the world has changed since the Battle of New York, cueing a heroic act by Mike. He exhibits super strength in climbing a building, rescuing a woman, and jumping several stories back to the ground, unharmed.

Skye (Chloe Bennet), recording video of the whole thing, starts her pursuit. The relationship between these two characters starts in the diner that Skye revisits in episode 21. Take a look at how different Skye seems in this scene. She’s a giggling fangirl, as excited to meet a real hero as she is determined to protect him from dark forces.

“They’re coming for you,” Skye tells him. Who are we rooting for at this point? From Skye’s point of view, S.H.I.E.L.D. are the bad guys. But who is she, really? We’ve just seen Mike act like a good guy. And he’s just so damn likeable. Later in the episode, however, he beats down the factory foreman who laid him off. The bloodied boss pleads, “I’m not the bad guy.” This isn’t a police procedural with black-and-white roles.

“This man’s world is about to get very weird. He’s going to need some help,” Coulson says of Mike. Give him the award for Understatement of the Season.

While the Skye/Mike plotline remains intense, we turn to the agents for the comic relief. One of the distinguishing characteristics of the show is how it lampshades its own idiosyncrasies; from Ward making a joke about the S.H.I.E.L.D. acronym to Simmons heading off our urge to point out her resemblance to a particular witch with “I’m not Hermione.”

Also, there’s lots of stuff here hinting about TAHITI. The remark by Maria Hill about how Coulson “can never find out” is disappointingly heavy-handed, when we have gems like: “I was looking at the big, white light and it felt like a lot longer than eight seconds.”

Returning to Mike’s story, the revelation about his, um, explosive personality, offers a fitting introduction to the Centipede story and a tie-in with Iron Man 3. The twist in which the damsel in distress is revealed to be a scientist behind Mike’s powers further drives the Deathlok plot. By episode’s end, we’ve got a lot of open-ended questions, and it wouldn’t have made sense if that were the end of Mike’s story, even though it seemed like it was. “Mike Peterson needs to disappear,” we’re told. And disappear he did. For seven episodes.