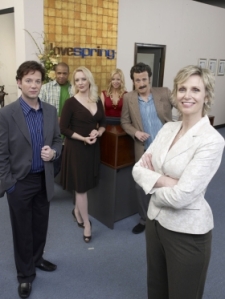 We’ve probably had enough of the mockumentary format for TV shows. We had probably already had enough of it in 2006 when Lovespring International ran for one basic cable-length season. But damned if it doesn’t make a handy format for introducing all of your characters in a pilot.

The trick is to capture the essence of each character in a just a handful of lines. If you go back to the pilot of The Office and look at Pam’s face when she says, “Jim said mixed berry?” you witness a real where-it-all-began moment. But I digress…

Lovespring International was produced by Eric McCormack of Will and Grace (who guest stars in ep. 2). It was partially improvised and features a cast familiar to fans of improv/sketch comedy. We are introduced to Lovespring International, elite Beverly Hills dating service (located in Tarzana, CA) by each member of the staff telling us what they do.

Victoria Rachford (Jane Lynch) is founder and CEO. Burke (Sam Pancake) claims to “run the place.” Lydia (Wendi McLendon-Covey, of Reno 911 and more recently the inappropriate mother from Bridesmaids) is a Relationship Consultant who asserts that she can find a match for anyone and assures the viewer that she is “married in her heart” to her partner of 20 years. Steve (Jack Plotnik, also of Reno 911), the company psychologist doesn’t mince words about his job saying he is “in charge of weeding out the crazies.” Alex (Mystro Clark) directs client videos, making people appear hotter than they are. Tiffany (Jennifer Elise Cox) is the whiny blond receptionist smacking her gum. Burke reminds us repeatedly that he is in charge of all of these people–we see more of him than anyone else.

All of these introductions might be an effective way to introduce characters quickly, but it feels a bit like spoon-feeding the viewer. Introducing the characters this way tells us a couple of things: It’s going to be an ensemble effort. The workplace is going to be a constant battle of egos. And the irony is going to stem from a bunch of so-called relationship experts who suck at relationships.

The meat of the episode happens as the agency’s top gold-level client files a complaint that too many men are falling in love with her. Victoria, learning that the agency is in danger of losing a major client, threatens to fire someone if they don’t save the account. Lydia comes up with a plan, which Burke co-opts as his own and then turns into a disaster with the assistance of Alex and plenty of booze.

The character we get the least time with, regretably, is Jane Lynch’s Victoria. She is just returning from a vacation in this ep. and it’s looking like her repeated absences are set up to become a bit.

The whole show has a sketch comedy feel that prevents the viewer (me, at least) from feeling really invested in the characters. Maybe it’s the improv element, the mockumentary format, or maybe it’s just the actors’ clowny make-up. It feels like, perhaps they might have grown on you over enough time. The Office felt really weird and cartoonish in the beginning (and the pilot wasn’t well-received), but after a couple of season you could say stuff like, “That is so Dwight.” Maybe the Lovespring crew could have grown on audiences if they had been allowed to hang around long enough.