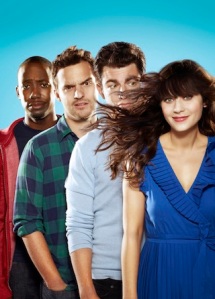 Just in case you’re not one of the reported 10 million people who tuned in for the much-ballyhooed premiere of New Girl last week, here’s the deal. It’s terrible. Okay, maybe that’s a bit harsh, but as someone who loves most of Zooey Deschanel‘s work going back to Almost Famous, I found this show to be a huge disappointment. You can pick apart whether the jokes are cliche or the characters are likeable, but I don’t generally expect much from network sit-coms in that regard.

My main problem: Why Dirty Dancing? What is the fascination with that movie? And is Zooey’s character Jess even old enough to remember it?? It came out in 1987, and she’s probably supposed to be 30, tops, so what exactly is her attachment to a trite film about a skeevy old guy (no disrespect to the late Patrick Swayze, who played said skeevy old guy) preying upon an idealistic teenager wearing Keds?

I’ll briefly recap, but even if you didn’t watch, you can get the whole substance of the pilot from the ads. After dumping her cheating boyfriend, Jess answers an internet ad and moves in with three young male roommates played by Matt Greenfield, Jake Johnson, and Daymon Wayans, Jr. (It’s not really clear why she had to move since she wasn’t even living with the cheater. She was living with her best friend and the only reason given for their split is that the friend is a model. Huh?) The guys come to adore Jess in the space of a week, then take her out to help her get over her breakup.

But back to Dirty Dancing. Sure, it was a summer blockbuster or whatever, but is Baby some kind of role model for today’s recently dumped woman? The character of Penny (Cynthia Rhodes, 80s dance movie heroine) is pretty tough and progressive, but she is generally forgotten. A good chunk of the New Girl pilot revolves around Jess’s obsessive rewatching of the film’s well-worn final scene and weeping into the sofa cushions. What’s she crying about? It’s not even a break-up movie! It has a happy ending. Baby is rescued from the proverbial corner. What is the connection between Jess walking in on her boyfriend banging some other girl, and a kid in the Catskills defying her father to skulk around with the help? I don’t get it. As a comedic choice, it’s not even original. Off the top of my head, Family Guy and How I Met Your Mother have done Dirty Dancing bits (photo below). 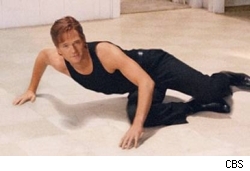 One of Jess’s more endearing traits is her constant singing. This is actually one element that promises to give the show some flair. She makes up little ditties about whatever is going on around her. So, singing winds up being integral to the climax of the episode. And what song is sung? “The Time of My Life.” It could have a been a really cute scene, where the three roommates arrive to cheer up Jess after she’s been stood up. And I have to give it to all four actors, they are really adorable as they fumble with the lyrics. Even the waitress who orders them out of the restaurant is really funny. But again, why this song, from this movie? It just doesn’t fit. The only thing I can figure is, this is a way to generate buzz for the recently announced D.D. remake.

Hopefully, the writers will not continue to milk this gag beyond the pilot and can come up with some more original situations than crying over an ex. Oh, one funny thing deserves mentioning: the douchebag jar. Like a swear jar for douchbaggery. They should have those in every bar in downtown San Diego.

Here’s an insightful take from the Huffington Post on the merits and shortfalls of Dirty Dancing and its pending remake.

One thought on “New Girl”