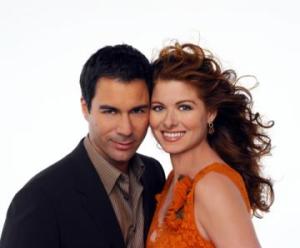 Getting engaged seems like a good event around which to build a pilot (How I Met Your Mother, Alias), as does leaving one’s betrothed at the altar (Friends, Happy Endings). Grace (Debra Messing), in the pilot episode of Will & Grace, does both. The plot revolves around her engagement and aborted nuptials with the unseen Danny, and her best friend Will’s (Eric McCormack) discomfort with telling her he thinks she’s making a mistake. As we know, it all works out for the best, and the two chums go on to spend eight hilarious seasons dating their way around New York City.

What interests me most about the pilot, however, is not Will and Grace’s relationship. It’s Will’s relationship with friend Jack (Sean Hayes), or rather the way the writers set up the contrast between them. We meet them as they’re playing cards at Will’s apartment with two other guys. As Jack mulls his hand he sings the show tune, “A Room Without Windows.”

Recall that in 1998, when this aired, gay television characters existed almost exclusively as flamboyant side-kicks or token friends of main characters. (Ricky from My So-Called Life comes to mind as a more developed, yet still minor, gay character.) The Will & Grace pilot sets up Will and Jack as two sides of a coin; while Jack satisfies our need for jokes about Broadway musicals and shallow hook-ups, we learn that he’s amusing even to his friends. When one of the other (straight) guys at the table suggests that there might be an attraction between Will and Jack, Will laughs hysterically while Jack retorts with a catty “Will should be so lucky.” It’s notable that we meet them in a very mundane situation, at home with friends, having normal everyday conversation; as if to say the “gay lifestyle” is pretty much, you know, normal. You could say they started what Modern Family has taken to the next level.

In Will we have a complete and compelling character from the word “action.” (This is not to minimize Jack. Though he remains fairly one-note throughout the show’s run, Sean Hayes is an absolute riot and has seven Emmy nominations to prove it.) Sometime in the 90s sit-coms started to allow more serious emotion to be part of their weekly ethos and not just “very special” episodes. Though the laughs are non-stop, Will is dealing with a serious problem here. Having to tell a best friend that you think she is marrying the wrong person is a task no one should have to bear. Through just a sprinkling of description about Danny, the writers provide a clear picture of Grace’s relationship with him and Will’s view from the sidelines.

As the story unfolds, it is mentioned that Will recently ended a long-term relationship. Because his partner has moved out, he is taking on a roommate, Jack, to defray expenses. While he banters with Grace, crushes competition at the $25,000 Pyramid home game, and cracks wise about Jack’s every move, we believe there’s pain there, too, at the break-up. We also get to see Will at work, where he is a confident and well-spoken attorney.

As for Grace, we learn that she chafes at being compared to her mother, works as an interior designer, and tolerates a foul-mouthed, pill-popping assistant, Karen (Megan Mullally — did you know she’s married to Nick Offerman of Parks and Recreation? — a little trivia). She keeps Karen around because Karen’s wealthy friends are frequent clients.

All of the exposition flows seamlessly. We are right in the action, knowing the characters and sympathizing with their problems. It’s comical when Grace storms into Will’s office in her wedding dress, her veil catching on the door; but it’s also bittersweet because we know that she’s just made a tough decision. The fact that Will influences that decision demonstrates her great love and respect for him; his being there for her in the aftermath demonstrates his great love and respect for her. He tells her not to lose hope, that her life is like the plot of a movie. “You’re just in the middle of your movie,” he says. Such a sweet line makes us love him from that moment on.

One thought on “Will & Grace”