How have I not blogged about this show by now? What finally prompted me was Mayim Bialik’s appearance on The Howard Stern Show, and a blog post she wrote about it. She’s awesome. During her hour-long interview, she talked about how new acting was to her when she was cast as the star of a sit-com at age 14. She and her parents lived in a rented house in L.A. with one bathroom, and she swears she was still a normal, nerdy kid at the same time she played the eponymous Blossom Russo. I believe her.

When you recall Blossom you probably think of something like, “Tonight on a very special Blossom… Joey says ‘whoa’.” (That quote is from something. Anybody know what?) And hats. Lots of stupid, floppy hats. Usually dismissed as a bit of 90s fluff, this show actually holds up, at least as demonstrated by the pilot. Here are some things about it that may surprise you:

END_OF_DOCUMENT_TOKEN_TO_BE_REPLACED

The New York Times recently ran a review of two new cop shows, Killer Women and Chicago P.D., wherein the writer referenced Dick Wolf’s journey as a creator of procedurals. Mega-producer Wolf has gone, as the writer pointed out, from president of the Boy’s Club to the guy who escorted Olivia Benson (Mariska Hargitay) to fan favorite status. I just watched the pilot of Law & Order the other day, and indeed, the first thing I noticed was the gender imbalance. To use a phrase coined by The Black Nerd, there’s too much beef in the stew. END_OF_DOCUMENT_TOKEN_TO_BE_REPLACED

Answers after the jump. END_OF_DOCUMENT_TOKEN_TO_BE_REPLACED

Point number one about the Boy Meets World pilot: Topanga isn’t in it. So if you’re watching for Danielle Fishel, skip ahead to episode 4.

I am a little too old for this show, meaning I didn’t grow up with it. It incites great love and devotion to 90s children, and I can’t quite relate, except to suppose maybe it’s their Growing Pains. If the pilot is any indication it’s pretty cheesy, but in a lovable way that makes you want to see these characters through their first world problems. END_OF_DOCUMENT_TOKEN_TO_BE_REPLACED

We’ve come to associate Abrams with time- and universe-hopping, futuristic warfare, and badassery. All good omens for the new Star Wars. But you do know he created Felicity, right? That teeny-bopper mellow-drama from the era of Dawson’s Creek? Fanboys and girls, I think this show warrants some examination. END_OF_DOCUMENT_TOKEN_TO_BE_REPLACED

If you’re at all into science fiction, I don’t have to convince you that Isaac Asimov was an amazing guy. He wrote about a zillion books and imagined worlds and technology that laid the foundation for science fiction as we know it. He coined the term “robotics,” for frak’s sake. But did you know he was working on a television show when he died? He shot a pilot episode, and the footage has been collected into a four-part video called Visions of the Future.

I admit when I first heard this news, I was hoping the imagined show was a drama — something along the lines of I, Robot meets The X-Files. This is not that.

END_OF_DOCUMENT_TOKEN_TO_BE_REPLACED 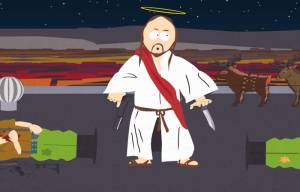 There are a handful of pilots — that I’m aware of — that are set during the holiday season. Here’s a list. Are there others? Please leave comments if you know! END_OF_DOCUMENT_TOKEN_TO_BE_REPLACED

There are people who love this show. I’m gonna say right up front, I had trouble getting through the pilot — I thought it was awful. It premiered in 1999. I had to look that up to be sure because, watching it with no prior knowledge, I was estimating something closer to 1989. I’m going to plead, “You can’t judge a show by it’s pilot,” on this one because apparently it improves.

According to TV Tropes, “While its premise began as a fairly standard science fiction show, Farscape quickly distinguished itself with a focus on complex, evolving characterizations, jaw-dropping plot twists and movie-quality special effects and cinematography.” END_OF_DOCUMENT_TOKEN_TO_BE_REPLACED

Since the Fox network is celebrating its 25th anniversary on April 22, I thought I should write a blog post in honor of it. First I thought I’d pick a show that Fox prematurely cancelled, but that would be like shooting zombies in a barn.

Then I realized, I have already blogged about enough Fox shows to keep the inhabitants of Omicron Persei 8 entertained until someone decides to reboot Single Female Lawyer. So, here’s a list in roughly chronological order. Some selections fit squarely into the “cancelled too soon” category while others, deservedly or not, continue to air. I’m up for suggestions as to others I should cover — just leave a comment. END_OF_DOCUMENT_TOKEN_TO_BE_REPLACED

Getting engaged seems like a good event around which to build a pilot (How I Met Your Mother, Alias), as does leaving one’s betrothed at the altar (Friends, Happy Endings). Grace (Debra Messing), in the pilot episode of Will & Grace, does both. The plot revolves around her engagement and aborted nuptials with the unseen Danny, and her best friend Will’s (Eric McCormack) discomfort with telling her he thinks she’s making a mistake. As we know, it all works out for the best, and the two chums go on to spend eight hilarious seasons dating their way around New York City. END_OF_DOCUMENT_TOKEN_TO_BE_REPLACED