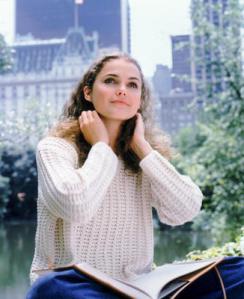 We’ve come to associate Abrams with time- and universe-hopping, futuristic warfare, and badassery. All good omens for the new Star Wars. But you do know he created Felicity, right? That teeny-bopper mellow-drama from the era of Dawson’s Creek? Fanboys and girls, I think this show warrants some examination.

Felicity was crazy popular and helped establish the WB (now CW) brand. Don’t hold that against it. I just watched the pilot and it’s really good. It opens during a high school graduation ceremony where our heroine, one Felicity Porter (Keri Russell), is graduating with honors. In a voiceover, she explains that, on this momentous day, she is lacking in all of the expected enthusiasm. She’s not looking forward to her future, which her father has planned out carefully. She is set to attend Stanford University before continuing to medical school and an illustrious career.

The scene that really grabs the viewer — that grabbed me — is this. As the ceremony winds down, Felicity approaches The Most Popular Boy in School, whose name is Ben (Scott Speedman), to sign her yearbook. In a beautifully staged dance, he begins to write, standing up, then sits on the grass, fully engrossed in his composition. Felicity circles him self-consciously before joining him on the ground. Felicity and Ben don’t know each other. Felicity has admired him from afar for four years, only now mustering the courage to start a conversation. When she finally reads what he has written, her stars align. It turns out Ben has noticed her, wondered about her, maybe even likes her. Just like that, she decides she’s going to college in New York. Where Ben’s going. It sounds ridiculous, but if you let yourself get caught up in the moment, you buy it. I probably would have done the same thing.

Felicity may not have a lot in common with Abrams’ other work, apart from having a one-word title. But Abrams, who co-created the show with Matt Reeves and wrote this episode, talks right to the shy, quiet, smart teenage girl inside us. That’s what Abrams does well — he gets nerds. He gets us!

Naturally, Felicity’s decision has serious consequences. We jump ahead a few months to find her at freshman orientation. And there’s Ben. He’s kissing some other girls and he seems to barely remember Felicity. Teen boys are fickle; who knew? All of the usual facets of college life are introduced — strange roommates, giant lecture halls, overbearing advisors and, most importantly, disapproving parents. Everything seems to point to New York being a bad decision, and Felicity has the perfect chance to bail. Obviously, she stays.

This pilot works well as a stand-alone story. It’s a clearly laid out hero’s journey, with our hero “defeating” her evil parents by choosing to own her mistakes rather than accept their safety net. I don’t even care what happens next. That’s a bad thing, strictly speaking, since I’m supposed to want to keep watching: Does she ever get Ben? Will she fall for the cute R.A., Noel (Scott Foley)? But I can already see where this is going. Tell me if I’m right. Eventually, Ben will start liking her but then it will be too late because she’ll be with someone else, probably Noel, and then the reverse will happen a season or so later.

If we can learn anything from this, it’s that Abrams is a damn good storyteller, regardless of genre. He creates great characters, especially female ones. (I can think of some parallels between Felicity and Olivia Dunham. Discuss amongst yourselves.) That’s a relief since the most beloved franchise of all time is now in his hands!

And, if you prefer to stick with his work on the small screen, he has two more shows in the works. Does this man sleep?