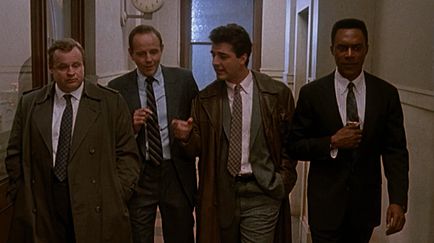 The New York Times recently ran a review of two new cop shows, Killer Women and Chicago P.D., wherein the writer referenced Dick Wolf’s journey as a creator of procedurals. Mega-producer Wolf has gone, as the writer pointed out, from president of the Boy’s Club to the guy who escorted Olivia Benson (Mariska Hargitay) to fan favorite status. I just watched the pilot of Law & Order the other day, and indeed, the first thing I noticed was the gender imbalance. To use a phrase coined by The Black Nerd, there’s too much beef in the stew.

I should note that this is one of those situations where it’s murky which episode was the first. The one I’m discussing, “Everybody’s Favorite Bagman,” is listed on Amazon as the pilot with an original air date of September 13, 1990. IMDB says that a different episode, either #2 or #6, depending on who’s listing them, “Prescription for Death,” aired first. The former involves a plot about a politician’s murder brining to light a government conspiracy, and that definitely sounds like pilot material. So I’m going with that one.

It first hits you during the opening credits: dude (George Dzundza) after dude (Chris Noth) after dude (Dann Florek, etc.). It doesn’t get any better as the episode progresses. Only two female characters get more than a drive-by of the camera. One is the victim’s widow; the other a hot blond in a uniform, too thin to be believable as a cop, who Chris Noth’s character flirts with. She flirts back. It’s totes unprofessional.

Certainly, Law & Order was groundbreaking. It was trying something new, helping us to recover from the age of slick, sharp-tounged and well-dressed crime fighters like Johnny Depp and Don Johnson. This show is gritty. The handheld camera work makes it that way, along with really bad lighting — which I’m not sure was intentional, or is a product of age. The characters perfect the walk-and-talk, along dingy streets and dingier hallways, coffee in hand.

I’m guessing the creators were going for a documentary feel, which they acheive. Honestly, I can’t tell you much about the plot. This thing was more boring than a senate scene from the Star Wars prequels. I can’t sit through it again. But I’ll tell you about the one shiny bit that stays with me, the only place where we get a little sense of a character’s individuality. (Today’s procedurals are always about the leads’ back stories, with the crime-of-the-week a device to tease those out.) The Assistant District Attorney, Paul Robinette (Richard Brooks) expresses disbelief when it’s suggested that the police Deputy Commander might be corrupt. It seems the young, optimistic ADA has idolized the older man since childhood. We watch, in small snippets, as he faces the truth. I believe Richard Castle said something about how difficult it is to watch one’s heroes fall.

Obviously, the show grew into a phenomenon. Maybe it was the right thing at the right time, or maybe it was just different enough. Maybe we’re just too used to hot cops with unlikely partners (novelists, psychics, forensic anthropologists) to take such a naturalistic style seriously anymore. Maybe it’s just me.

Fun facts: Ronald Regan starred in a movie called Law and Order in 1953. Law & Order: Elevator Inspector’s Unit from The Simpsons makes me laugh every. single. time. Other spoofs include FCU: Fact Checker’s Unit, a very funny web series that I always meant to blog about and never got around to.