In case we weren’t already excited enough about the return of Community on March 15, the fine folks at NBC have decided to whet our whistle with some animated shorts. The obvious question: Why didn’t they think of this a long time ago? That animated holiday special in 2010 (has it been that long?) rocked.

The pilot episode of Abed’s Master Key is only a precious minute and 56 seconds long, but to fans so long deprived of a meal, these are succulent little crumbs. The episode just gives us a quick look at all of the main characters–the study group and Dean Pelton–hanging out in their usual spot, the study room that has seen everything from a zombie uprising to some Jeff-Britta coitus. END_OF_DOCUMENT_TOKEN_TO_BE_REPLACED 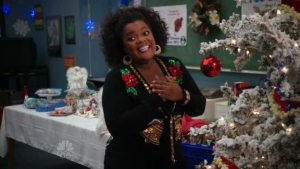 Okay, so this is not a pilot, but I have to gush about this most recent episode of Community, “Comparative Religion.” If you are new to the show, this would be a great episode to start with because, in fact, it has all the elements of a pilot. Each member of the ensemble cast is featured more or less equally, and we get to learn what each one is like. And it’s set on a day that will be a turning point for all of them—passing Spanish 101.

It’s the last day of classes at a Greendale Community College before the winter break; we know all of this from a brief announcement by the bumbling Dean. This is much the same as the opening scene of the pilot. Through his portrayal of “Mr. Winter,” a religion-neutral holiday character, we get the message about the school’s obsessive PCism. The scene really captures the insanity of this show.

The episode revolves around a holiday party, being planned by Shirley (Yvette Nicole Brown), a recently divorced, middle-aged student who professes her strong adherence to the true (i.e. Christian) meaning of the holiday season. By each character explaining his or her beliefs or lack thereof, we get a well-rounded and hilarious picture of this ragtag group of Spanish students. There’s the Jehovah’s Witness, the Atheist, the Agnostic, the Muslim, the Jew—ahem, the Jewish woman — and the claims-to-be-Buddhist-but-is-apparently-just-in-a-cult guy. I’m disappointed that there’s no Pagan, but it’s a fun mix anyway. It’s the perfect set-up for grossly offensive humor. And it works because, for all their differences, these people are all friends, who operate more like a dysfunctional family.

The show also has a running gag of parodying 80s movies. When Jeff (Joel McHale) is challenged to a fight a tough guy in the cafeteria, we’re reminded of any number of films where the main character is challenged to a schoolyard brawl, and his friends are by his side to help him prepare.

The group is divided over Jeff’s choice to fight; Shirley thinks it violates the Christmas spirit (even though it’s only December 10), and Britta thinks it represents repressed homosexuality. These are typical responses by both of these characters that have been reinforced throughout the fall season. Of course it all has a hooray-Christmas-is-saved ending, but with a hilarious twist that further emphasizes the characters’ kinship and the show’s irreverence. Lessons are learned, but the characters remain as crazy as ever.

I was a little skeptical about this show’s promise when it debuted in September. But it has turned out to be consistently entertaining and out-of-the-box, culminating in a fantastic fall finale. You have to buy into the premise that these seven people would hang out together in the first place, but if you can do that, it’s totally worth it. I just have one question… what ever happend to John Oliver’s character?

Memorable quote: “As much as I hate you and the cast of Breakin’, I have to ask myself, ‘what would Shirley do’?” 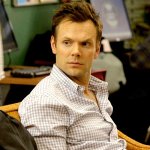 So, how about a brand, spanking new show? Community, which premiered September 17, is set at Greendale Community College, and apparently designed to exploit every stereotype you ever had about community college.

The school’s Dean, incompetent from the very first moment of the show, serves as a fitting introductory device, asking, “What is community college?” As he names off the different “types” found in a community college, the camera shows us each principal character, matching those descriptions.

The expositional responsibility soon shifts to Jeff (Joel McHale), a lawyer who is going back to school to right some old wrongs:

“I thought you had a Bachelor’s from Columbia.”

“Well now I have to get one from America.”

Jeff forms a fake study group to hit on a hot girl, and it quickly turns into a real study group, where we get to have all misfits from the various social groups thrown together. We get a diversity officer’s wet dream of colors, ages, and genders. (Thankfully, there’s no wheelchair-bound guy to give an excuse for easy disabled jokes.) There’s no reason to believe this group of people would willfully stay together. It’s one of those premises you just have to accept to get on with the show.

The thing is, Jeff thinks he’s got community college in the bag with an old client/friend, Professor Duncan (The Daily Show’s hilarious John Oliver), running the department, who’s going to get him the answers to every test. But Duncan wants to teach Jeff a lesson in integrity. So Jeff has no answers, and he ends up having to stay with the group.

If nothing else, the episode deserves credit for its Breakfast Club references and for being dedicated to the recently departed John Hughes.

It’s a pretty typical pilot. It’s got the “New Kid on the Block” thing going for it, where it’s everybody’s first day in a new universe, so the audience gets introduced to everyone/thing along with the characters. Nobody has any gigantic hurdles set up for them, though. Ostensibly, we’ll get to each one’s inner turmoil in later episodes. I can’t say I’m dying to find out about those. We’ll see if it lasts.