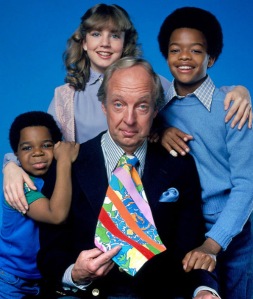 It may seem that the cast of Diff’rent Strokes is competing with the cast of The Golden Girls to see which beloved sitcom can have the last actor standing. (Of the four central characters from each, three are no longer with us; Rue McClanahan, The Golden Girls‘ Blanche and Gary Coleman, Diff’rent Strokes‘ Arnold, left 80s television fans mourning in the very same week in 2010.) They’re tied, as of this past week, when Conrad Bain, who played Philip Drummond, passed away at age 89.

Bain was known to the world well before Diff’rent Strokes, having co-starred on the long-running series Maude (along with Golden Girl Bea Arthur, which gives me an idea for a new game, Six Degrees of Golden), among numerous other screen and stage credits. But he is probably well-remembered to many who were children during the time he was playing the most generous millionaire dad on the small screen. END_OF_DOCUMENT_TOKEN_TO_BE_REPLACED 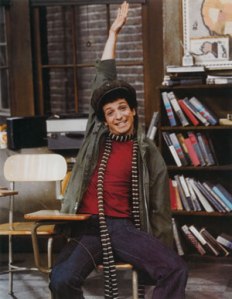 When Robert Hegyes, aka Juan Epstein, died back in January I promised a post on this pilot, but never quite got around to it. (I do have a day job.) But I cannot let the passing of Ron Palillo, aka Arnold Horshack, pass unmarked. He may be the most memorable — certainly the most imitated — character from the show. END_OF_DOCUMENT_TOKEN_TO_BE_REPLACED 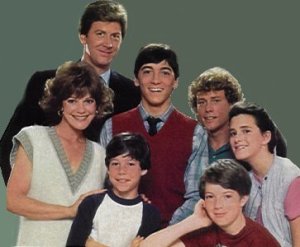 In honor of today’s rumors that Scott Baio has died, something that happens now with some regularity, and with #RIPScottBaio trending on Twitter worldwide, it seemed like a good time to blog about the pilot of a beloved ’80s sitcom, Charles in Charge. Just the title conjurs the tinkly sound of the theme song in your head, doesn’t it?

This pilot is one that I almost didn’t need to rewatch to write about it, but it is free on Hulu if you want to check it out. The show is about Charles, a preppy college student working as a babysitter and housekeeper to an upper middle class family with three kids. Apparently 1984 was the year for mannies. (See also Who’s the Boss, debuting the same year.) END_OF_DOCUMENT_TOKEN_TO_BE_REPLACED 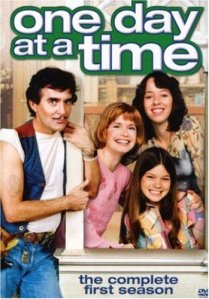 Since I recently wrote about Hot in Cleveland, I thought it would be fun to look back at an earlier Valerie Bertinelli vehicle, One Day at a Time. She was just 15 when she started playing Barbara Cooper in 1975.

The pilot gives a slice-of-life picture of the Romano/Cooper family of Indianapolis. It’s not their first day in town, it’s no one’s first day on the job, and no characters are meeting for the first time. The writers could have chosen to start the story with Ann leaving her husband, or with her breaking the news to the girls that they were moving, or with their first day in the apartment. But since that transitional period is behind us, we have more opportunity to see the relationships among the characters as they function on a relatively normal day.

We open with a typical family discussion, in which older daughter Julie (Mackenzie Phillips), tries to manipulate her mother into letting her go on a co-ed camping trip. Like most teenage girls, she considers her social engagements the highest household priority and can storm out of a room as well as any modern day reality “star.”

While Julie is stomping around in self-pity, younger sister Barbara has just become the first girl on the school basketball team. Her tomboyish attitude stands in stark contrast to Julie’s girlishness, setting up for plenty of future conflicts. Valerie doesn’t get a ton of screen time, but her snarky strength here is little like what she displays in Hot in Cleveland.

The show finds its edge in exploring the age of the liberated woman. Ann jokes about—and struggles with—wearing the mantle of both mother and father to two headstrong teenage girls. She’s a strong woman and lets her daughters be strong women, too. Independent though she may be, Ann is pursued by two men; her younger, charming divorce lawyer, David (Richard Masur), and the smarmy, married building superintendent, Schneider (Pat Harrington, Jr.).

The show was taped in front of a live audience, so we get our cues when to laugh and how hard. However, the jokes arise naturalistically out of the dialogue. The only time the jokes get ham-handed is in the banter between the two sisters. Barbara calls Julie “the pits,” like that’s the worst insult ever. Was that a thing in the 70s?

Importantly, in addition to laughs, the show has heart. At the mid-point we finally learn what is the “first” that makes this day pilot-worthy. Ann makes her first crucial solo parenting decision , calling Julie’s bluff on a threat to move out. As Julie disappears down the hall, Ann makes the speech on which the pilot rests: “For the first 17 years of my life, my father made the decisions. For the next 17, my husband the decisions. The first time in my life I make a decision on my own, I blew it.” Bonnie Franklin gives an versatile performance, moving easily from glib to passionate, from funny to moving. Her face when Julie returns speaks volumes.

Other feminist ideas are woven in, like when Ann ponders whether God is a woman, and when she mentions that she has returned to using her maiden name. Though they were probably uncommon at the time, such ideas are treated as matter-of-fact. Today, in contrast, “feminism” is often treated as a dirty word and such ideas are lampooned—my, how far we’ve come. Unfortunately the Julies on television seem to have outnumbered the Barbaras; just look at the women on Hot in Cleveland. 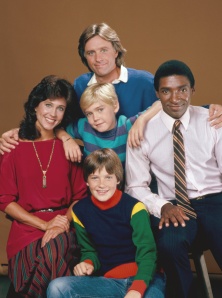 Yes, Silver Spoons, the sit-com from the 80s. We Gen X-ers tend to have fond memories of this show, up there with Diff’rent Strokes and Gimme A Break. But do we remember how it all began?

It’s just another day in the life of millionaire Edward Stratton III (Joel Higgins)—riding a toy train, playing the full-size arcade version of Pac-Man—until his accountant shows up to inform him that he’s squandered all his riches. Not five minutes later, a tow-headed military school student (Ricky Schroeder) shows up to announce that he’s Stratton’s son. Stratton reacts to these two pieces of life-changing news with uncanny calm. And, man, it’s amazing they didn’t wear out the laugh track.

Computers were new and exciting in 1982. When little Ricky Schroeder tossed of the phrase “random access memory,” most viewers probably had no clue what that was. Computers run everything in the Stratton mansion from the drapes to the bank accounts, and we understand that the kids is going to have a better understanding of the technology than the father.

Ricky plays dumb with the accountant, who demonstrates how to use the big, mysterious computer with the clunky telephone modem, to view Stratton’s finances. This leads to the revelation that the accountant is a big, fat crook.

Stratton sends Ricky back to school, then regrets it, and—dressed a swamp thing—asks him to return and live in Chateau de Pac-Man.

Two-thirds of the way through we get a brief introduction the freaking adorable Jason Bateman as Ricky’s classmate. (We have to wait two years for Alfonso Ribeiro.)

It’s kind of amazing now the way emotional life decisions are glossed over like deciding what to order at Jack-in-the-Box. I guess that’s why, back then, “very special” episodes stood out as shark-jumpers. The very mention of sadness warranted a character speaking to the camera at the end, telling us the number of the national suicide hotline.

I think that today, even on sitcoms, crises are treated with a little more seriousness. Maybe in the carefree, big-hair 80s we just weren’t ready.