Awkward. is to My So-Called Life what Happy Endings is to Friends; that is, one in a long line of copycats but the one that has copycatted successfully. It’s got a great title, complete with punctuation, for starters. That made it worth checking out in my book.

The writers want you to know right off that Awkward. is not like other teen shows. One of the protagonist, Jenna’s, first lines sounds like a direct dig at the soapy AMC Family hit, The Secret Life of the American Teenager: “This wasn’t the inciting incident of some sappy teen special about how I got knocked up on the last day of summer camp.” It does open with our heroine getting it on in a utility closet adjacent to a gym with a blue-eyed popular hunk of hormones. You can practically smell the Axe Body Spray. END_OF_DOCUMENT_TOKEN_TO_BE_REPLACED 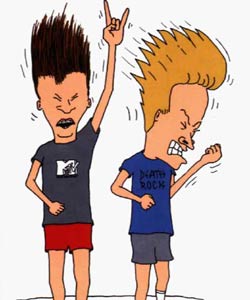 MTV is going to reboot the 1990s animated series Beavis and Butthead, so it’s a good time to revisit the original. Beavis and Butthead got its start at Spike and Mike’s Festival of animation, which is no surprise; it’s weird and disgusting, and really edgy for a time when the edgiest animated series on TV was The Simpsons. The episode that aired at the festival, the pilot, was “Frog Baseball.” The episode labeled 1.01 on the DVDs now available is something different, apparently from about a year later.

The show, as it aired, interspersed short snippets of story with longer stretches of Beavis (creator Mike Judge) and Butthead just sitting on the couch commenting on music videos. The DVDs seem to contain only the in-between stories, which are pretty weak on their own, and not even that funny. (I’m guessing this is an issue with the rights to the music videos.) The couch sections were what made the show different and, dare I say, relatable, to anyone who grew up with afternoons that grew long and boring as summer vacation wore on, in the era when MTV played videos. Who doesn’t enjoy making fun of Milli Vanilli?

The “plot,” to use the term loosely, isn’t important in this pilot. It’s about, well, frog baseball, which is pretty self-explanatory. It gives us a chance to meet these two slacker kids who love blood and hard rock. They wear T-shirts emblazoned with the names AC-DC and Metallica. When the game goes well—well meaning bloody—the characters air guitar anthems like “Iron Man.” Butthead is the ersatz leader of the pair, and Beavis is even dumber than him, if that’s possible. The outdoor landscape is dried out and bleak, and knowing now that Mike Judge tends to set things in Texas… it’s probably Texas.

When they’re back home in front of the tube, nothing else in life seems to matter. There is nary a parent in sight and, in the pilot, we don’t meet any other characters at all. (Later there are various neighbors and classmates, including the inspiration for the spinoff Daria.) The slacker ethos pervades every aspect including the crappy animation. But, for all their apathy, B & B have strong opinions about music. They don’t articulate these opinions with any grace; stuff either sucks or rocks. If it really rocks it warrants lifting one’s hands in devil horns and headbanging. The animation quality actually seems to tick up a notch as the characters’ hair flies back and forth in heavy metal abandon. When, before 1992, did we see an animated character headbang? The videos alternate between terrible and what is now terrible but was then cool. If you ever liked Axl Rose, even a little, you can probably find something to like here.

I’ve realized that, although I love animation, I have yet to write about any animated series on this blog (except for a couple of mentions in this entry on my favorite pilots).

I started thinking about why this is. There are a couple of characteristics that make animated series a little different from other series in the pilot department. Animated series tend to have more emphasis on the plot-per-episode than on a longer story arc. In other words, nothing much changes episode to episode. Bart Simpson has been in fourth grade for 20 years, for chrissake. So the pilot is not necessarily distinguishable from later episodes.

Also, animated series are often based on existing properties, like comic book or film characters, who don’t need a lot of introduction. There are some obvious exceptions to this, like Seth MacFarlane’s brain candy or earlier, Futurama (great pilot).

I couldn’t decide what animated series to start with, but then I happily discovered a little show from the creator of Scrubs, Bill Lawrence, called Clone High. There were 13 episodes, which aired during the 2002-03 season on MTV, and it still airs in Canada, according to www.clone-high.com.

It’s the first day back at a high school where all of the students are young, contemporary versions of historical figures. There’s Abraham Lincoln (Will Forte), Joan of Arc (Christa Miller, Mahatma Ghandi, John F. Kennedy (Chris Miller), Cleopatra (Nicole Sullivan), and—you gotta love this—two Elvises, one young/thin and the other old/fat. Already you know by the wackiness of the premise this show is going to be different, as well as irreverent. In the first moments we get a crude sexual joke from JFK, and a drug use bit from old/fat Elvis, and learn that Ghandi is a lech. The animation looks a bit like Foster’s Home for Imaginary Friends with the sharp angles and bold outlines.

Each character falls into a high school social category. JFK is a handsome jock, Abe Lincoln is a gangly nerd, Joan of Arc is a down to earth do-gooder, Cleo is the popular chick, etc. There’s a love triangle: Joan likes Abe, who likes Cleopatra. (Who wouldn’t, right?)

The principal, Dr. Scudworth is pulling the strings. He is visited by someone from the military and we learn, in case it wasn’t obvious from the title, that the students are clones. They were created by the government, though we’re not yet told why. The pricipals office comes equipped with test tubes and other mad scientist paraphernalia. And he’s nuts.

There are lots of whimsical little details, like the diner where they hang out is called the Grassy Knoll. Van Gogh calls the school suicide hotline.

The episode plot has to do with Abe supplying a keg of non-alcoholic beer for the Big Party, but it appears the real story will be the aforementioned love triangle. We’re also told that Marilyn Manson will make an appearance next week. If the pilot is any indication, this show is funny, edgy, and has plenty of room for political commentary. I’m hooked, and can’t wait to watch the remaining episodes.