Kids living with substitute parents were big on 80s TV. Television would have had us believe you could will your kids to your employer (Diff’rent Strokes), take in homeless teens (Growing Pains), force two guys you slept with to share custody of your kid (My Two Dads), or raise a robot as your daughter (Small Wonder), all without any legal intervention. I don’t know if the networks were just trying to be inclusive of less traditional families or catering to kids who wished they could trade theirs in.

In this climate, Punky Brewster’s premise wasn’t hard to buy, but the show went above and beyond in attempting to be realistic. In making the pilot a three-parter, the network expressed their confidence in the audience’s willingness to stick with it, and the creators acknowledged the complexity of the subject matter. Don’t misunderstand; the show debuted with all the trappings of an 80s sit-com, including a whimsical montage, but it boldly adopted the tone of a “very special” episode right out of the gate. END_OF_DOCUMENT_TOKEN_TO_BE_REPLACED

Answers after the jump. END_OF_DOCUMENT_TOKEN_TO_BE_REPLACED

It may seem that the cast of Diff’rent Strokes is competing with the cast of The Golden Girls to see which beloved sitcom can have the last actor standing. (Of the four central characters from each, three are no longer with us; Rue McClanahan, The Golden Girls‘ Blanche and Gary Coleman, Diff’rent Strokes‘ Arnold, left 80s television fans mourning in the very same week in 2010.) They’re tied, as of this past week, when Conrad Bain, who played Philip Drummond, passed away at age 89.

Bain was known to the world well before Diff’rent Strokes, having co-starred on the long-running series Maude (along with Golden Girl Bea Arthur, which gives me an idea for a new game, Six Degrees of Golden), among numerous other screen and stage credits. But he is probably well-remembered to many who were children during the time he was playing the most generous millionaire dad on the small screen. END_OF_DOCUMENT_TOKEN_TO_BE_REPLACED

I’ve been curious to dig up this pilot for a long time, so I decided that Alyssa Milano‘s 40th birthday would be an auspicious day for it. She’s 40. Yeah. You know what that means, if you grew up watching the show: You’re old.

The show’s simple premise show is dispatched before the opening credits; a single dad (Tony Danza) is moving from the big city to the suburbs so that his young daughter can experience the protection of a white picket fence. It’s a concept resurrected recently with Suburgatory, but Samantha Micelli is much younger, and the impetus for the move is a black eye rather than condoms. END_OF_DOCUMENT_TOKEN_TO_BE_REPLACED

Most television casts evolve over time and, when you look back on a long-running show you might forget which characters were the originals. Can you imagine Cheers with no Frasier, no Woody, and no Lillith? In watching the pilot, 30 years old this season, you might be surprised to recall there were essentially only six characters: Sam, Diane, Coach, Carla, Norm and Cliff

The pilot, as you might assume, centers on Sam (Ted Danson) and Diane (Shelley Long) and their first meeting. It’s your basic Welcome Episode, where a new member is introduced to an existing group. It’s horribly contrived and implausible, but sometimes that’s how pilots go, and it doesn’t mean that a good show can’t unfold. First there’s a pointless cold open, where an underage kid shows up in the empty bar and tries to order a drink with a phony military ID. All we learn from this is that Sam isn’t completely gullible. END_OF_DOCUMENT_TOKEN_TO_BE_REPLACED

The fall television season in 1982 brought us a slew of what went on to become hit sit-coms. This fall marks the 30th anniversary of Cheers, Silver Spoons, Newhart, and Family Ties… as well as Square Pegs, less successful but still cherished in the hearts of  80s girls. Did viewers know that Shelley Long, Ted Danson, Ricky Shroeder, Michael J. Fox, and Sarah Jessica Parker would become icons of an era? Probably not. But in the wake of The New Normal, The Mindy Project, and The Neighbors in recent weeks, I can’t help but feel nostalgic. (What’s the obsession with definite articles?) END_OF_DOCUMENT_TOKEN_TO_BE_REPLACED

Fox ran the pilot of Married… with Children in honor of its 25th anniversary, and the broadcast may have led some people to wonder what anyone ever saw in this show — which ran for eleven seasons. That’s ten seasons longer than Firefly.

The pilot takes place over the course of a single day. (Is this a sit-com pilot trope? I’ll have to think about that.) It starts as many family sit-com pilots do, with the morning routine. Before heading off to school, the pint-size son harasses his teenaged sister, while their mother delivers a flaccid reprimand. As they head out, the husband, Al enters from upstairs dressed for work with a bandage on his hand. He’s injured and, in what will become an incessant theme, his problem is his wife Peg’s fault. She’s not accepting any blame, however, ferociously defending her right to do whatever the hell she wants. END_OF_DOCUMENT_TOKEN_TO_BE_REPLACED

In honor of today’s rumors that Scott Baio has died, something that happens now with some regularity, and with #RIPScottBaio trending on Twitter worldwide, it seemed like a good time to blog about the pilot of a beloved ’80s sitcom, Charles in Charge. Just the title conjurs the tinkly sound of the theme song in your head, doesn’t it?

This pilot is one that I almost didn’t need to rewatch to write about it, but it is free on Hulu if you want to check it out. The show is about Charles, a preppy college student working as a babysitter and housekeeper to an upper middle class family with three kids. Apparently 1984 was the year for mannies. (See also Who’s the Boss, debuting the same year.) END_OF_DOCUMENT_TOKEN_TO_BE_REPLACED

If you ever watched Reading Rainbow growing up, either in school or on your own, you probably remember the basic idea. In each episode, the host, LeVar Burton, presents a children’s book.

As an educational show, the first episode, which aired in 1983, isn’t a pilot in the typical sense; it doesn’t need to introduce characters or a story, just a format. But if think back to your childhood (depending on your age) you might wonder what book was the first that LeVar shared with us. END_OF_DOCUMENT_TOKEN_TO_BE_REPLACED 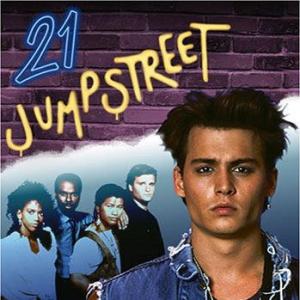 Even for the ’80s the 21 Jump Street theme song is cheesy. Its peppy, synthesized beat puts one more in the frame of mind to watch teenagers dance on cafeteria tables than to witness the solving of gritty, hard core crimes. Most of Part 1 of this 2-part pilot, however, sets the tone for a run-of-the-mill procedural. A young, hot-headed new cop (Johnny Depp) is out to prove himself as worthy as his dead cop father and is paired with a cranky old partner (Barney Martin), months from retirement.

“It seems you like to roll in hot and kick tails,” the older cop barks. “…’Cause with that baby face you got everybody’s been kicking yours since the seventh grade.” END_OF_DOCUMENT_TOKEN_TO_BE_REPLACED