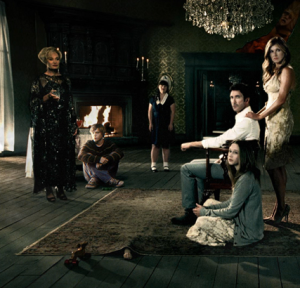 It’s been a while since I’ve seen a pilot that convinced me that the ensuing show was going to be something different. American Horror Story employs a lot of conventions we’ve seen before, yet this episode completely held my attention. I can’t exactly say I loved it–it’s no The Walking Dead, the brilliance of which I will never shut up about–but it has that thing. I can’t help but compare it to Locke & Key, which was screened at Comic-Con this year but never actually made it TV. The powerful aesthetic of American Horror Story (on FX) further convinced me that Locke & Key failed only because it was shopped to the wrong network, but I digress…

No one element of this story stands out as particularly unusual. We’ve all seen horror fare with creepy, prescient little kids, deserted old houses, and disturbed teenagers. This pilot crams in more tropes than there are Friday the 13th movies. Yet, it does so in a slick, visually gripping package devoid of camp.

The show opens in 1978, with pre-adolescent twin boys charging into a deserted mansion armed with baseball bats, ready to exact damage. A young girl with Down Syndrome warns them, “You’re going to die in there.” No big spoiler here. They do.

Next, in present day, we meet Vivien (Connie Britton, of Friday Night Lights). We find her in the exam room of her OB/GYN, reporting on her recovery since a miscarriage. “I’m just trying to get control of my body again… after what happened,” she tells the doctor and us. Control will become a theme; control of one’s body, or one’s surroundings, of one’s own mind. Vivien is pretty–the crisp attractiveness of the actors is part of the show’s glossy look–but not in a that stereotypical horror movie victim way of the screaming bleached blonde crashing through the woods. She’s almost handsome.

Next we play witness as Vivien catches her husband Ben (Dylan McDermott) in bed, in their home, with another woman. Fast forward a few months and the family is seeking a new start in–for some reason–Los Angeles. The couple has a teen daughter named Violet (as in shrinking), who stops being ambivalent only long enough to be cheeky. The family moves into the mansion from the opening scene, where we learn that the previous inhabitants, a gay couple, died in a gruesome (is there any other kind?) murder-suicide. We now know we’re dealing with multiple incidents that have given this house its horror. To say the manse itself is a character would be cliche, but one the creators want to make sure we get. This is Ryan Murphy and Brad Falchuck, the guys who brought us Glee and Nip/Tuck; subtlety is not in their wheelhouse.

Jessica Lange appears is next-door neighbor Constance, a cleptomaniacal Norma Desmond, whose character name surely isn’t an accident (she’s been around to see it all with this house.) The Down’s Syndrome girl is now grown. Constance introduces her, “This is my girl” (not “daughter”), so who knows what’s up with that. Constance embodies the politically-incorrect-old-person trope, dropping terms like “Mongoloid” for the girl and “those people” for gays, but we feel guilty laughing. In fact, all of the show’s laughs are the uncomfortable kind.

Vivien hires the previous owners’ maid, who we see as an elderly woman with a glass eye. When Ben meets her, he sees a hot young redhead. This moment takes the show to the next level of weird. The spirits live, it seems, not only in the basement of the home but in the minds of its inhabitants.

Ben is a shrink and he’s treating a homicidal teenage boy (Evan Peters) in his home office. (This, too reminds me of Locke & Key.) The kid has a monologue that smacks of Message-of-Show. “The world is a filthy place,” he potnificates. “It’s a filthy goddamn horror show.” He and Violet (unknown Taissa Farmiga) latch onto each other like dysfunctional Velcro.

The longest scene is one in which husband and wife rehash the sordid details of their troubled relationship, and ends with them having angry sex. But, like, five seconds later, a guy in a head-to-toe black leather bondage suit appears in the bedroom and wants to have sex with Vivien. She is surprisingly good to go. It’s assumed, on the audience’s part, that the man is not Ben, something a little hard to buy. Not only has Vivien avoided sex with Ben since his affair, until like five seconds ago, but she doesn’t even question this perv’s identity? Although she can’t see the guy’s face you might think she’d recognize–or not–other parts of him. It sort of feels like kinky sex was the only missing element the creators wanted crammed into this shock-fest, but there you have it.

Oh, yeah. Constance has a history with the maid. She says to her, “Don’t make me kill you again.” That’s gonna be important, don’t you think?

Still, as ridiculous as it all might sound, the pilot is totally entertaining. It doesn’t feel like a horror show, but more like basic cable’s answer to Victorian literature. It drips with color and disdain. Perhaps it’s that we’re so used to having our scary stories wrapped in camp that emotionally raw voices like we find here and in The Walking Dead demand our attention.