I know I’m far from the only person to be disappointed by the season 7 finale of The Walking Dead. But I’ve felt the need to pinpoint exactly where the show went off the rails for me, and to articulate what, precisely, it has lost.

In the beginning, I was surprised to find myself enjoying a horror show so much. “It’s not about zombies,” was how I explained it to everyone who hadn’t seen it. “It’s about the people.” Not only was it about people… it was about hope. I’m sorry to say good-bye to beloved characters, but such good-byes are par for the course. What I can’t forgive is the loss of hope. END_OF_DOCUMENT_TOKEN_TO_BE_REPLACED

In July, the fall TV season seems a million years off. The networks are mainly reruns and there’s nary a pumpkin spice latte in sight. Returning from San Diego Comic-Con — or your other summertime con of choice — do you sometimes wonder how you can stand the wait for all the premieres that were teased or screened?

Having spent the past couple of weeks finally watching all the new fall shows, we can now talk about what they looked like without con goggles. Some lived up to the hype and some didn’t. But do you think your experience was colored by what you saw this summer?

I first saw part one Archer’s “Heart of Archness,” three-episode series at SDCC, and now it holds a special place in my heart as one of my favorite episodes of that show. There’s one joke (about punching a shark in the friggin’ face) where I can almost hear the crowd in the Indigo Ballroom laugh every time. END_OF_DOCUMENT_TOKEN_TO_BE_REPLACED

I’ve been waiting a long time to blog about the pilot of Star Trek, in part because I couldn’t decide which “pilot” to choose. The unaired one, “The Cage,” would not have been the world’s introduction to the character of Mr. Spock (Leonard Nimoy), being unaired and all, but it now serves as a record of how that character was first imagined. As we mourn Nimoy’s passing earlier today, it’s time to think about the character with whom he was virtually synonymous.

Upon Spock’s sacrificial death in Star Trek II, Kirk famously declares, “Of all the souls I have encountered in my travels, his was the most… human.” Spock’s heritage doesn’t get unpacked in “The Cage,” but apart from his appearance, he doesn’t come across as any different from his human shipmates.

Spock speaks the first words of the episode. He’s giving instructions on the bridge regarding a strange signal that The Enterprise is picking up. Although Capt. Christopher Pike (Jeffrey Hunter) sits in the captain’s chair, it’s the pointy-eared half alien Science Officer we first see in control. When it turns out the signal may be coming from a marooned Earthling ship, Pike wants to stay the course and ignore it. Spock wants to go investigate — a compassionate and not exactly logical choice.

Pike is experiencing an existential crisis, having recently lost three crew members during a mission. He’s pondering whether to abandon his present occupation for a small town life of leisure back home. The ship’s doctor (John Hoyt) changes his mind with the help of a martini and the observation, “You treat everyone on board like a human being except yourself.”

The episode gives us a bit of insight into how Starfleet treat women versus men; the ship’s First Officer and Yeoman are both women and, although Pike indicates that he views the latter as more feminine than the former, this episode has nothing on the actual pilot for sexism. That’s probably another post.

When a landing party that includes Pike and Spock beams down to the site of the crash, they find a world not unlike Earth. From that point on, Spock gets little screen time, but first there’s The Smile. Much has been written about how uncharacteristic it is of Spock to smile at the simple novelty of an alien plant, but he grins like he’s in a Crest commercial. It’s sweet. Since he’s half-human, it seems — ahem — logical that he would exhibit spontaneous human joy, but some fans have taken strong issue with this “mistake.”

The plot of the episode concerns a race of people who communicate telepathically and want to build a colony of humans like a zoo exhibit. They have their “Eve,” thanks to the crew that crash landed 18 years earlier, but they’ve been seeking their “Adam.” Their choice, Captain Pike, can’t be contained, of course. The zookeepers take out the power on The Enterprise, attempting to use the ship and crew as bargaining chip. This time, it’s Spock who wants to cut the crew’s losses and bail. Perhaps bookending the story with these two antithetical orders was an attempt to illustrate Spock’s dual nature.

There’s surprisingly little action in tin the episode, which is likely what was “wrong” with it. There’s some cool technology, including of course the transporter. But other than a nifty laser, we don’t see much in the way of weaponry or pyrotechnics. The focus is more on human emotions, desires, and dreams. The pacing is slow, and one can imagine a network not wanting to introduce its new sci-fi action series this way. That’s okay. It lives on, if just a step outside of canon.

And Spock lives on. Smiling aside, Nimoy is the only member of the cast who hung around for the series, so apparently he hit the mark. Geeks around the world have shed tears today, in unabashedly human grief. LLAP.

Mork form Ork wasn’t Robin Williams’ first role, but it was certainly the one that made him a household name. So, as we mourn the passing of a man whose life’s work was to bring joy to others, I thought I’d take a look at the pilot of Mork and Mindy. It premiered in 1978, after the character earned raves in a dream sequence on Happy Days.

Mork’s story is told in linear fashion, with one exception, which I’ll get to in a moment. The show opens with him being called into the principal’s office, so to speak, as he appears before the shadowy Orson, his boss. Orson (named for Orson Welles?) reprimands Mork for his constant joke-making. Humor has no place on their planet, so Mork is being sent on assignment to Earth. 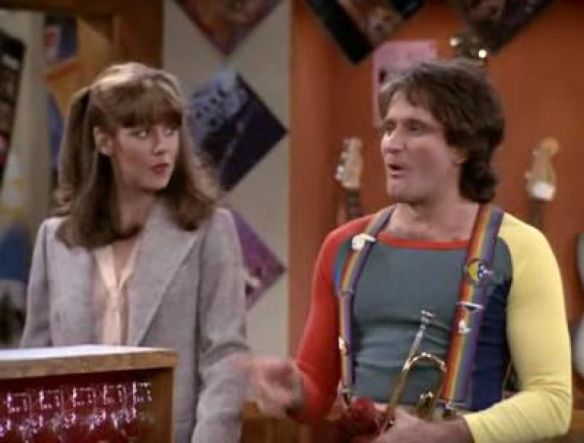 His ship lands in the woods near Boulder, Colorado, where Mindy (Pam Dawber) is being sexually assaulted by a date, who then steals her Jeep. This is an interesting scene, because in a more clichéd show, Mork would have rescued her from the douchebag, and then she would have fallen for Mork romantically. Instead, in the show’s emblematic fashion, she mistakes Mork for a priest because he’s wearing a suit backwards and the collar looks vaguely like a priest’s. He walks her home, where she offers him some iced tea, and his true identity comes out. END_OF_DOCUMENT_TOKEN_TO_BE_REPLACED

During the pilot episode of Constantine, the eponymous character (Matt Ryan) says something about impatience being a 21st century disease. It’s an apt observation in comparing the two pilots screened last night at San Diego Comic-Con, The Flash and Constantine.

The two shows had more in common than just being derived from comic books. Themes of weather and dead parents recur, for example. I’m not analyzing them in terms of how faithful they are to their origin materials, or whether characters lived up to expectations, but only how each pilot functions as a pilot. END_OF_DOCUMENT_TOKEN_TO_BE_REPLACED 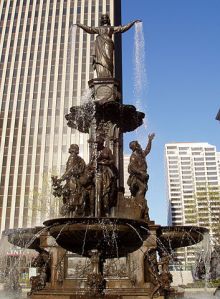 Just in case anyone’s paying attention, I wanted to post a quick explanation for where I’ve been lately. I have every intention of watching lots more pilots and blogging the crap out of them.

However, I’ve recently lost a family member, moved across the country, started a new job, and become a homeowner. It’s a lot. It’s kind of like Hot in Cleveland meets Mary Tyler Moore meets WKRP in Cincinnati and a little touch of Suburgatory. Except I’m married and all these shows are about single people. Hey, that gives me an idea for a new show.

Check back — I promise I’ll write something interesting.