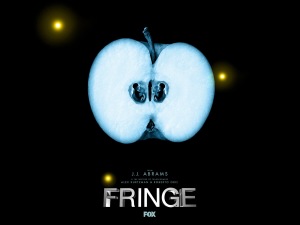 Fringe, from its beginning, is a character driven show. It’s a procedural, to be sure, but the pilot lets us know that three strong personalities are going to drive the action: FBI Agent Olivia Dunham (Anna Torv), Peter Bishop (Joshua Jackson), and Dr. Walter Bishop (John Noble).

We don’t meet Olivia as badass cop woman. We meet her as she is falling in love, in bed with the object of her affection, sweet and almost demure. This is a reversal of the typical female action hero who is usually tough first, vulnerable later. It’s not as if Olivia’s a wimp; we see her in action soon enough. She’s part of a joint task force reporting to Homeland Security, which is called upon when a planeload of civilians die inexplicably mid-flight. Within in minutes we find Olivia chasing down a suspect and, after that, putting her brains to work to solve a mystery. During the chase her romantic and professional partner, John, is hit by an explosion. He winds up comatose, poisoned and dying from an unidentified contaminant.

John is introduced too early to survive. People who are happily together at the start of a drama pilot are destined to be torn apart. But that won’t stop our heroine from trying to save him.

Trying to discover the nature of the poison, Olivia is soon on the trail of a mysterious and insane researcher, Dr. Bishop, living in an institution. She demonstrates her powers of persuasion by travelling to Iraq to coerce the researcher’s genius son, Peter, into coming with her to bust him out. Dr. Bishop worked studied “fringe” science 17 years ago before being locked away in a stony vault.

When the bearded Dr. Bishop turns, ever so slowly and looks up at Olivia, we know we are meeting a powerful character. “I knew someone would come,” he intones. A bit like Temperence “Bones” Brennan, Walter thinks in pure facts. He may be a genius but his social interactions are painful to witness.

The episode is filled with quiet moments; long, awkward pauses at once suspenseful and humorous. Everyone has moments when a parent embarrasses them. It’s just more intense when said parent is a mental patient. Peter sure hates Walter, but as the viewer, we’re not sure whether either one has good intentions or bad.

Peter is a total ass to Olivia, but she doesn’t stand for it. You feel her frustration when she says, “You call me sweetheart one more time? I’d really like that.” It’s not an obvious sexual tension between them, as might be expected. Simply, they’re both strong people who know what they want.

As we delve further into the mystery of the poison, we’re introduced to Massive Dynamic, your basic giant, evil corporation. Its founder, a Dr. Bell, is Walter’s former partner. We don’t meet Dr. Bell, but only his Executive Director, a snippy woman with a super cool bionic arm. The pilot is double-length, basically a movie, so suffice it to say, this is only the beginning. We’re promised a future filled with teleportation, astral projection, reanimation and the like. More importantly, Olivia is at a critical juncture in her life and career.

The snowy cold landscape of Boston provides a distinctive atmosphere. The show is filled with interesting visuals: a cow walking down a crowded university hallway, a man with transparent skin, a woman in a tank hooked up to electrodes. Though it gets compared to The X-Files, and it’s even been suggested the two shows take place in the same universe, Fringe is unique in many ways. We know from the pilot that we’re headed down a conspiracy theory rabbit hole, which could easily get cheeseball, but there is promise that these characters will keep us coming back.