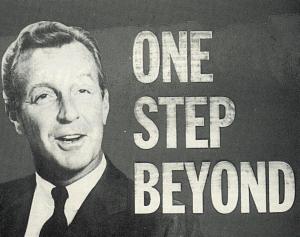 Shows like One Step Beyond and the better-remembered Twilight Zone are, in many ways, the entertainment ancestors of The X-Files, Fringe, and numerous other science fiction series featuring a mystery-of-the-week. So it’s informative to explore where sci-fi (or SyFy) television came from. Although the show doesn’t appear to be widely known, it had a reboot (The Next Step Beyond) in the 70s has been available on DVD since 2009.

One Step Beyond hit the airwaves in January 1959. In the episodic dramas of today we generally follow along with investigators as they try to solve the mystery at hand. Back then, we just had things laid out before us by a narrator. John Newland, who was a well-known actor and director at the time, claims that these stories are true. Whether we’re really meant to believe that is unclear. Newland introduces and concludes each one with measured gravitas. He’s not given to flashlight-under-the-chin mellowdrama. Each half-hour episode tells a single, stand-alone story, with different characters every time. It doesn’t matter much which order they are viewed in.

Episode 2 actually seems like it might have made a better pilot than Episode 1. (It’s possible it was the episode that sold the series.) Episode 2 is about the sinking of The Titanic, and various premonitions people–real or fictitious–had about it. With such a well-known and captivating event at its center, one would think this episode would have been idea for capturing an audience. That being said, I’m here to look at Episode 1, “The Bride Posessed.” The title itself is a bit of a spoiler, but it’s a fairly original tale.

We open with a rather cheap wedding reception in a tavern. The boisterous guests all seem to be friends of the groom, Matt (Skip Homeier), and we learn that the bride, Sally (Virginia Leith) is newly transplanted to California from Louisiana. There’s a bit of suspense about whether a certain wedding guest might get surly, but nothing comes of it. Perhaps this is an attempt to set the audience on edge for what’s coming.

As the couple drives away from their reception, Sally is asleep. When she wakes up, she begins directing Matt where to drive, giving explicit detail, even though she has supposedly never been here before. She becomes increasingly frantic to get to a particular location, eventually taking the car and leaving him stranded. Matt enlists the help of a policeman, who accompanies him to find Sally in an abandoned house. The officer explains that the previous resident recently committed suicide by jumping off of a nearby cliff, the name of which we heard Sally mention in the car. As things unfold, it becomes clear that the dead woman, Karen, has posessed Sally in order to report that she was, in fact, murdered.

We’ve seen stories of people who returned from the dead to solve their own murders, and stories of people posessed by demons, but this is a little different from either. Sally’s head doesn’t spin around; there is no blood or gore whatsoever. We never even meet the accused murderer. The story is primarily told from the point of view of the groom, watching his new wife thrash and scream with frustration when no one will listen to her. One exception is when we see though Sally’s eyes; in perhaps the most spine-tingling moment of the episode, she looks into a mirror and the reflection is that of Karen.

Resolution comes when the dead woman, through Sally, leads them to the murder weapon used to bash her head in. Sally falls asleep again and wakes up as herself. (One wonders what kind of anxiety this man is going to experience everytime his wife dozes off.)

Though it may not be suspensful or action-packed by today’s standards, “The Bride Posessed” hooks the viewer by asking them to wonder “what if?” That is really why we watch science fiction, is it not?