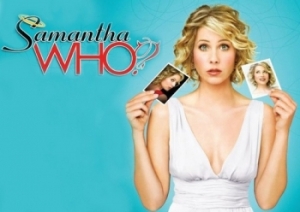 Samantha Who was a sit-com in which Christina Applegate played the eponymous character, but Jean Smart, who plays Samantha’s mother, steals the pilot. She opens the show with snarky hilarity not far removed from her character on The Oblongs. Samantha wakes up from a coma to find her mother, Regina, standing over her with a video camera, generating sympathy footage to win a spot on Extreme Makeover: Home Edition. “I don’t care if no one likes her. She’s my daughter,” she trills.

For a sit-com pilot, this one has quite a bit to accomplish. It has to fill us in on a good chunk of back story and essentially introduce us to two versions of the protagonist. It was also a show that built on itself, episode to episode, so the pilot had to start that momentum. It’s a comedy that’s part mystery, keeping viewers on their toes.

Samantha awakes from her coma with retrograde amnesia; she doesn’t remember anyone or anything. Overlook that cliched improbability and indulge in the fantasy the show offers–what would you think of your life if you could view it as a objective outsider? How would you fix what’s wrong with it? We already know that no one likes Samantha, thanks to Regina, but Samantha doesn’t. Her parents seem to at least be there for her, as does her boyfriend Todd (Barry Watson; Matt Camden is all grown up and smoking hot) and her self-described best friend Dena (Melissa McCarthy doing her usual spunky thing). But life is full of surprises for Samantha and, in turn, the audience.

Jennifer Esposito plays  BFF Andrea, a 180-degree switch from her character on Related (did anyone but me watch that show?), but her value as a friend is highly suspect. We first meet her as she and Regina trade punches in a hilarious scene back at the home of Samantha’s parents. The two of them are so evenly matched for understated bitchiness, they could have their own spin-off. Andrea also informs Sam that she hasn’t spoken to her parents in two years; we have to wonder if that’s by Sam’s choice or theirs.

Andrea invites Samantha out to a club and the secrets being to emerge. Each twist builds on the last. We find that Samantha has been cheating on Todd with a married man named Rene, that she actually ditched Dena as a friend back in the seventh grade, and that she can fire off scathing insults at lightening speed when provoked. Oh, and she’s an alcoholic. Martini in hand, she discovers an AA token in her purse–which says more about the kind of friend Andrea is than anything else–and bolts of to a 12-step meeting.

Barry Watson as Todd has a unique task to pull off in all this. He’s perfectly polite, but not at all affectionate with his supposed girlfriend. Their attempt at a kiss is hopelessly awkward. There are no tears of relief that his love has emerged from a coma alive and well; something is definitely off. Yet, he is fully willing to allow Samantha back into their home and demonstrates his attentiveness by reciting personal details about her like that she always sneezes three times. When Samantha asks smarmy Rene how many times she sneezes, he reacts with fear of catching something. So, we’re set up to root for Todd. However, we find out near the end that he broke up with Samantha just before her accident. It’s probably for good reason, based on what we’ve learned of her so far. That leaves us with our season-long question, will they get back together?

The show did well in its first season but viewership dropped off in the second because, really, how long can you believably sustain an amnesia story? By the end of the pilot Samantha has already had one flashback, from the day she and Todd met as she stole his double latte at a coffee shop. Pieces of memory like this are destined to continue episode after episode. The pilot leaves us wondering what else will pop up. It also goes out on a high note with a great Jean Smart moment.

Here’s a video of Jean Smart talking about the show.