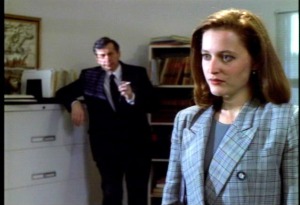 Looking back at The X-Files, which premiered in 1993, it’s almost impossible not to compare it to a hundred other shows to air since. As a huge Bones fan, I’m most inclined to look for parallels to that show, and many have been drawn. Yes there’s the female-skeptic/male-believer duo, which apparently, was unusual in 1993. But upon re-watching, the X-Files pilot strikes a tone that is all its own.

The pilot opens, as many crime shows do, with a murder. But this is not two drunk kids having a frolic in the woods when they stumble onto a body. Instead, we witness a scene that, if you happened to just turn it on at that point, you might mistake for the climax of the episode. The victim displays absolute terror as a bright light appears over a ridge and a figure emerges from it. Cut to the police investigating the scene. We are briefly introduced to a detective who recognizes the victim as a classmate of his son, class of ‘89. Only after the crime of the week is established do we meet our protagonists.

Dana Scully (Gillian Anderson) is an FBI agent who is brought into the office of one of her superiors, where she is properly introduced to the viewer. She was recruited out of medical school to the FBI, where she has worked for two years. She is clearly a trusted member of the team, as they are asking her to check up on another agent with an established high-profile career who takes an interest in classified files. As she is briefed on her new assignment, a tall, silent man–who will later be known in X-Files lore as Cigarette Smoking Man–stands by…smoking a cigarette.

Scully heads to a cramped basement office to meet this volatile agent, Fox Mulder (David Duchovny). Mulder is painted as eccentric, but he’s not Walter Bishop eccentric. In fact, with his boyish charm he could be described as a cross between Walter and Peter Bishop. Later, his celebratory reaction at realizing that he and Scully just jumped through nine minutes is reminiscent of Dr. Emmet Brown. He’s a likeable character, as is Scully, but the immediate tension between them feels forced. It’s understandable that he is defensive toward her; he believes she is there to spy on him. Her defensiveness isn’t so easy to understand. We can assume the writers are going to work up some sexual tension between the two.

Legend has it that Scully had a boyfriend in the original script, possibly increasing the stakes. here is a hint of sexual tension when Dana strips down to her underwear to show Mulder some bumps on her back, after which they sit around and talk by candlelight. The scene reveals some of each character’s vulnerabilities. But there is no witty, flirtatious back-and-forth; just two people getting to know each other.

As one might expect, this work has personal meaning for Mulder. His sister was abducted, he believes by aliens, as a child, and the record of the case was covered up. It’s predictable, but you have to have your personal connection. (Bones’ mom was murdered, Olivia Benson was raped, Kate Beckett’s mom was murdered, Veronica Mars was raped… I could go on.)

There is something unique about this pilot, however. The episode overall has the feel of a true crime television special, putting into a realm of freakiness above normal network drama. Opening with the subtitle, “The following story is inspired by actual documented events,” and then using typewriter text to denote times and places add to this effect.

The plot, which involves mysterious deaths of several former Oregoneon high school classmates, gets relatively complex. Personally, I find the casting of all these middle aged white guys with receding hairlines confusing; I couldn’t keep straight the detective, the medical examiner, and the coroner. That being said, the show really is story-driven. There are no shots of gorgeous bodies and scenery like in the CSIs or any slapstick, such as sometimes works into Bones or Castle.

The detectives more or less solve the case, only to learn that all the paperwork they file on it immediately disappears. The show ends with the Cigarette Smoking Man taking the one piece of surviving evidence and filing it away deep in the Pentagon archives. This scene sets up the show for a long time to come.

Perhaps the lines that best encapsulate where we’re headed are when Scully asks, “Do you have a theory?” to which Mulder answers, “I have plenty of theories.”